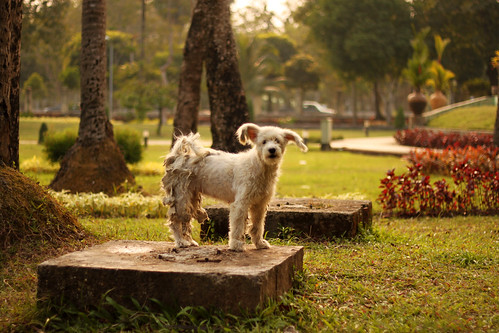 END_OF_DOCUMENT_TOKEN_TO_BE_REPLACED

The untold horrors of Vangvieng

Vangvieng had a bit of a reputation. Adventurers who had forded the Mekong before and returned to Korea told of a kind of dark partyland filled with drugs and terror. In this lucid, bacchanalian hellscape people were forever blasted out of their gourds on cheap, bathroom-brew LSD and radioactive mushrooms, swirling through life in a semi-permanent haze that left them brain-damaged and covered in body paint. It was a town insomuch as people sometimes lived there, but really it was a gateway to the river of sin and villainy.

The river was a gurgling, slow-moving pleasure obstacle course surrounded everywhere in jimmied-together shacks full of bargain booze and drunk foreigners. A shop in town would rent you a large, poorly maintained tube, which you then took to ride down the river. Locals, who were really just personified manifestations of human desire and low will power, would hook your tube as you floated by, make a margarita in your mouth, load your capillaries full of hallucinogens, and shove you back out into the rapids.

We imagined a sort of outdoor opium den, clouds of dark purple smoke puffing up into the sky in the shape of psychedelic dragons over the prone bodies and lolling tongues of dozens of foreign corpses. It was widely known that the town boasted an impressive death rate, as addled backpackers leapt from rickety bridges and fraying rope swings directly on to piles of jagged rocks while screaming, one supposes, “I AM THE ARCHBISHOP OF THE TUBE KINGDOM!”

END_OF_DOCUMENT_TOKEN_TO_BE_REPLACED

The foreign population is very ready.

Living in Korea has made me acclimate to a number of weird phenomena. Probably the weirdest thing that I’ve grown gradually comfortable with is semi-regular blastings of air-raid sirens, assemblies of small children into terror formation, full-scale evacuations of which I am no part, accompanied by the sounds of frenzied screaming over intercoms and people fleeing towards local shelters. These are just drills, and really, after the first few times, you barely even notice them.  With water on all sides, Japan’s nuclear exhaust and China’s metallic yellow particulates regularly invading our airspace, and some wacky neighbours just north, there’s something to be said for preparedness.

Preparedness is pretty goddamn terrifying the first time around. But it gets easier.

END_OF_DOCUMENT_TOKEN_TO_BE_REPLACED

I have never had so many people so deeply invested in the ongoing travails of my hair. As discussed, its texture and whackness were a matter of considerable debate and conversation  amongst the many Koreans in my life, particularly those at my school. It became my calling card feature, other than the whole, you know, being white thing. People also became very, very used to it, thinking of it as a natural part of the landscape.