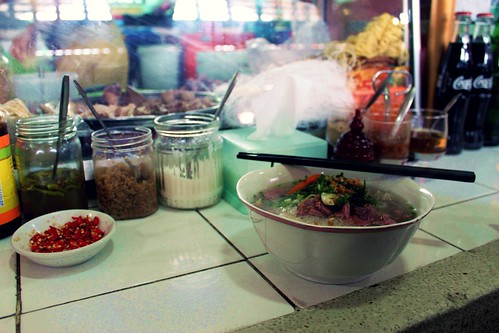 It had been a busy day of Hangzhou-ing, and we were ready to eat. It was murky and rainy out and we quickly moved from restaurant to restaurant, trying to find any that would pique our interests. The famousest and fanciest of Chinese eateries were long full and boasted impressive waiting lines.

We eventually settled on one tidy, pleasantly mediocre-looking joint. Jen, our life coach and Chinese interpreter, set about discussing what to eat with the waitresses, while another staff member led us to a room in the back. We filed into what appeared to be my grandfather’s dining room circa 1947, and began gathering around the table, which was draped in an enormous doily and then sealed in mylar.

Agnes cringed as she pulled out her chair, and pointed to the skittering vermin that she had loosed. It flexed its pincers or tendrils or legs or whatever at us angrily, unhappy at being disturbed. “That’s a fairly large cockroach,” Agnes muttered, attempting to undersell this monstrosity. If the cockroach had sat down to the meal with us he could have fit in an infant’s high chair and requested a kid’s menu.

END_OF_DOCUMENT_TOKEN_TO_BE_REPLACED

Time for Korean food by the bucket.

“Well, when I lived in Asia…” begin so many of my sentences these days. Moving away is hard, and as it turns out, so is moving back. Chronicles of Reverse Culture Shock is a series devoted to these difficulties, and is also an outlet so that I don’t become That Guy Who Won’t Shut Up About Korea to all of his friends.

A Korean restaurant in Korea is a beautiful, efficient kind of place. You enter, sit at your table, and order essentially within the first moments. The menus are not terribly voluminous, and the assumption is that if you entered this restaurant in the first place, you knew what you were coming for. (Many restaurants specialize in exactly one kind of dish, so you say how many of the foods you want and in what, if any, variations.) The waiters disappear, and rush back with your steaming bowl or your rack of raw ingredients and leave you to it. They will not check on you, they will not make small talk, they will not feign interest, and they will not interact with you unless they you summon them by the convenient doorbell on your table (bing-bong!). They give you food and then leave you alone, and at the end of the meal you take the bill, which was already at your table, and pay elsewhere and never ever think of leaving them a tip. The people operating the restaurant are unobtrusive, practically invisible, more spectral visions of humans, ghosts carrying trays that exist only in your peripheral vision.

Which is to say that a Korean restaurant in Korea is my idea of paradise.

END_OF_DOCUMENT_TOKEN_TO_BE_REPLACED

Uh oh. This island has no tourists. That means it probably sucks!

Pakbeng was the pitstop city on the two-day boatride down the Laotian portion of the Mekong. We checked our bags into one of the numerous hotels that existed solely for one-night-only stays, each with the same threadbare blankets and cheery-bored proprietors, and went looking for a restaurant early in the evening. All of them were empty, all of them lit with strobe lights and blasting strange techno, ghosts of electronic noise and foreign tongues on tinny speakers. Each had a menu of buffalo meat and locally brewed bathtub liquor at bargain prices, so we picked at random and sat down.

As we ate, we noticed that the tables around us gradually filling up until the restaurant was packed. We recognized people from our boat, gave them our barely-committed acquaintanceship smiles, and noted how suddenly our pick for dinner was suddenly flooded with business. When we looked up and down the street, a similar pattern held. Those few restaurants that lured some tourists within the early goings were flush with business, while those that hadn’t remained desolate and empty.

When we exited the restaurant, some Australian teenagers sauntered up and asked us to recommend a hotel nearby. The restaurant owner tried to interject and the young Aussies recoiled as if assaulted, declaring they would only follow our advice. Restaurant Owner rolled his eyes, wandered off, and got back to the business of selling water buffalo sausage.

END_OF_DOCUMENT_TOKEN_TO_BE_REPLACED

Taipei, which we actually managed to get to.

We arrived, sleepless and bedraggled, in Hong Kong at six a.m. Our future was yet to be determined, we hadn’t eaten, and it was already an alarming 32 degrees at this time of morning. Taipei, racked by a typhoon, was not going to let us, or anybody, in.

Though the airport troll in Bali made our fate seem rather dire, the plucky sprites at the Hong Kong airlines desk seemed more optimistic about our chances. As long as we showed up remarkably early before whatever flight to Taipei we desired, we would be put on standby. Comforted by this vague but slightly less doom-shrouded outlook, we set off into Hong Kong.

END_OF_DOCUMENT_TOKEN_TO_BE_REPLACED

When we wake to leave Ubud, Tony does not feel well: he has an encroaching fever which, in the middle of the jungle in south Asia, is certainly worrisome. It could be anything: the food or the mosquitoes or the temperature. Perhaps the angered spirit of the departed King decided to start doling out Balinese curses willy nilly. But, he maintains, we should just brave on. Some time on the tiny, isolated Gili Meno would uplift his spirits!

The route, we thought, would be a pleasant boatride to the Gili islands, off the coast of Bali. Each of us pictured a gentle ferry: an enormous, weighty monstrosity, practically a small island, that would barely sway as it was rocked by the ocean. Boats so big the ocean was rocked by them.

This was not the kind of boat we got on.

END_OF_DOCUMENT_TOKEN_TO_BE_REPLACED

I’ll have one tasty, please. To go.

One of my greatest joys when travelling is the local food. Tracking down the good eats comes just behind getting into the country and finding a place to sleep. With time I’ve even come to grow more selective in my travel partners, based purely on ingestion-based criteria : exactly how much can they eat? How adventurous with taste and texture and varieties of animals? Are they open to eating more than one dinner, or inventing wholly different meals throughout the day when hunger or something delicious-smelling strikes us? Of course, the dinner companion is not the only concern: we need to actually get the food, first, in order to eat it. And making that happen while abroad is sometimes not so easy.

END_OF_DOCUMENT_TOKEN_TO_BE_REPLACED

Korean food is very good. This is not something I feel up for debate, and living in Korea, the place where Korean food is from, I am regularly ensconced in the highest quality, most authentic versions of it I can possibly eat. Koreans do Korean food very, very well, and they all generally enjoy it a great deal. The problem, of course, is all of the other foods: Chinese and Mexican and Indian and Turkish and Thai and Canadian… all of these foods are reprocessed and filtered through local Korean tastes, and Koreanized in just a certain way. Those times when I tire, when I want something outside of the Korean wheelhouse of cuisine, I am bereft. When I want the food of home, it’s just not here.

END_OF_DOCUMENT_TOKEN_TO_BE_REPLACED

There are times when being heavily, heavily visible in a foreign country can suck. You’re a target for, well, everything. Stares and invective and anger and nationalistic tides of xenophobic distaste. At the same time, because you’re so visible, you’re also an easy target for pleasantness and the great weirdities of life. Being some of the only foreigners to attend the local Sorae Port Festival, we were stopped at different times in the day to: be interviewed for television and/or promotional subway materials, join a large group of middle-aged Koreans to share in their soju and fresh fish, do some handicrafts typically meant only for kids, receive free calligraphy scrolls, and be adopted by a man who claimed to be a local fishboss (I have decided this is a word). We were invited to do these things because we were weird lookin’ and the people around us felt in a sharing mood, and we stick out as being share-with-able. Being impossible to miss has its perks. Enjoy the glory of the Sorae Festival, in photoglut form.

END_OF_DOCUMENT_TOKEN_TO_BE_REPLACED

How to summarize 2 and a half weeks home? The place that I grew up, where everyone I ever knew and loved lives? Where I did stuff, and saw people, and slept in a comfortable bed and had constant air-conditioning, and regular, unrestricted access to a pool? I could allow you to swim in the sea of my neurotics, on the mixed feelings I got about returning to Korea when everything at home just seemed so perfect (except for that whole, you know, joblessness thing). I could talk about how weird and how good it feels to be back in the adopted home. But food is evocative, and it provides me a nice narrative structure when I couldn’t hash another out, so here we go: Toronto in 11 meals.