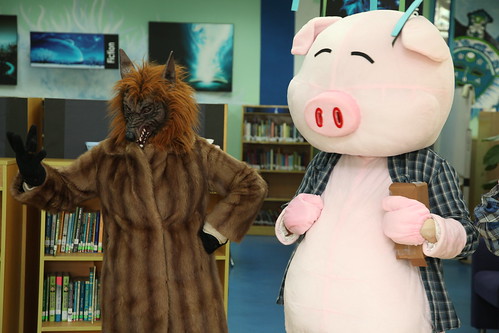 The children broke into groups to interview us, to discuss our perspectives, to explain our relationships to the others pigs and the wolf and why we were holding bricks and straw. When we departed, the wolf hot on our trail, we needed to jog back up a flight of stairs and down the long hall to our grade classrooms so we could change, deposit our farmland carapaces, and try to right ourselves. We returned to the library to pick up our charges, only slightly unkempt and red-faced, and asked them what was all the commotion.

It was exhausting and taxing and impossible to manage. There were extra adults on-hand just to keep things running smoothly, and I went home that day from school feeling like all the life had been drained out of me.

But the kids went home grinning and gleeful, excited about the day they had had and thinking about the days to come. Childhood joy with learning is teacher cocaine. It is difficult in those moments when I am pulling on my sweltering costume or climbing into a large time machine or organizing massive piles of garbage, and I feel like I may need a caffeine IV drip pumped directly into my aorta. But then a 7-year-old tells me that they love school, that they love science or math or reading, and suddenly sweating through a felt costume isn’t so bad.

My mailbox is constantly full of letters and packages from mysterious strangers, all of whom have relevant pedagogical needs. Toymakers who need capsules to contain specific capacities of small toys, animals who need homes built out of specific material, endangered species wrapped up in packages with clues suddenly appearing in my email. Puppets crawl suddenly onto my chair, waiting to discuss their views on the stories from which they emerged, and everyone in the room is perfectly willing to ignore my hand jammed up the puppet’s butthole, because this is elementary school, where sorcery lives.

It helps that my students are at exactly the right age of guilelessness. Their concept of cool is so nascent as to be non-existent, so the idea of their teachers playing dress-up and leading them on a variety of educational journeys is as plausible as it is joyous. My kids know that “special guest” means “teacher dressed up like an idiot” just as much as it means “something terribly amazing and interesting is about to happen.” One or two are staunch cynics, desperate to point out the flash of business casual poking out of a mad scientist sleeve or how a certain puppet sounds just like me. But they are drowned out by the rest. They are swallowed by the desire to just go with it and let learning be as much Disneyland as it should be.

It’s not always easy, nor does it always work. I think of attempting this solo, of conjuring together this much spectacle as a lone ranger educator, and the prospect seems terrifying. The children will get a lot out of it, but you need collaborators just as much as you need enthusiasm. You need other grown-ups who are willing to winkingly try on anything at all for the sake of a good investigation.

Anything sometimes being a time machine, built from cardboard boxes and painted to perfection, filled with people in clothes borrowed from forgotten high school drama productions. It sometimes means running from one end of the school to the next to collect paints and wood and metal and paper and plastic and having a much-desired “garbage party.” With enough recyclables, some non-toxic paint, and a room full of wide-eyed children, you can make basically anything happen. The only limitations are your walls, the sky above, and how many silly wigs you can get your hands on.