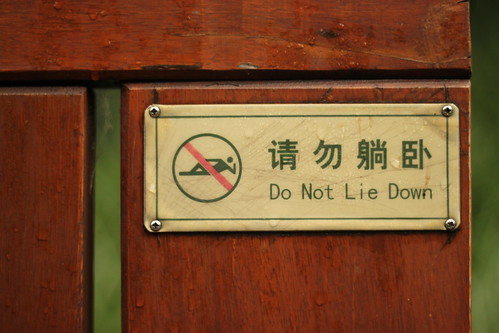 Never do I feel quite so self-satisfied as when I enter a Chinese subway.

As you exit Shanghai Central from the intercity trains to the metro, there is a long, horrible corridor coated in sadness and human suffering. There are banks of ticket machines for the subway, each bracketed by greasy aluminum barricades to hold in the masses. As each train lets out, hundreds and thousands of people flow through this hall as they move to the subway. Almost every machine is constantly utilized by people who have absolutely no idea how to work such a machine, nor how to use money, or possibly even their own fingers.

For months I huffed and grunted and tapped my feet, waiting desperately as dozens of people tried and failed to use the machines that worked so simply. I grew frustrated even as I knew that I could cast my speedy technological gaze over the device and have my own tickets and theirs produced in several seconds. Worse yet, experience meant I could probably manage to use the hulking brute in English or Chinese and still get in and out in just a moment. In recent months I have taken the extra step of self-congratulation and have purchased a reloadable metro card, which allows me to bypass the line and feel deeply, undeservedly metropolitan at the same time.

To be fair, as is usually indicated by the sheaves of wheat and the general wide-eyedness at being in the big city, most of the machine delays seem to be from hayseeds entering Shanghai for the first time. This phenomenon can happen anywhere, with the blinding gleam of chrome and underground tunnels and enormous skyscrapers that blacken the sky. There are people inexperienced at navigating big city and big city custom all around the world, in China or Canada or Cameroon.

But I must claim my victories when I can. As someone typically scrambling through most of my life in foreign countries, those few times when I have the advantage seem absolutely staggering. Wow, I think to myself, gleeful and stunned, sometimes there are people who are worse at China than me! I swell with pride, puffed up and satisfied and redolent. I could build a raft out of my own ego and ride it down the Yangtze with how proud of myself I sometimes get.

Of course, most of these people could probably open a bank account or count to numbers higher than 100, but again, small victories. Even with my feeble Mandarin, even with my internet-borne understanding of local mores and customs, I can get a surprising amount done for myself.

The rest of the time, it is a growing lack of shame which allows me to flit through life with such vim and vigour. The knowledge that you are both completely alone and utterly helpless is ultimately kind of freeing. With nowhere to go but up, you become a lot more willing to engage with the ridiculous to start the climb.

Where in my home country I would never ask others how to purchase food at a particular establishment for fear of looking stupid, this question is now a regular part of conversation. Where once I might have stuck to Google and an unearned faith in my own sense of direction when I got lost, now I am happy to ask strangers for guidance roughly once every five steps. I stand before a street-side food stall and fix my best utterly perplexed face on until the proprietor takes pity and suggests something to stuff into my gullet.

And these are learned practices. Deeply entwined with my sense of worldliness is my growing comfort with appearing guileless and in need of immediate assistance lest I simply expire on the side of the road. As I have grown in my skills at travel, so to have I recognized the best ways to act out my own ignorance and stupidity to amuse and engender the pity of those likely to assist me. I don’t know how to live life in a lot of places around the world, and the best advice will always come from the people for whom it is already second nature.

At home this kind of expression of helplessness seems unfathomable. I can’t imagine not knowing what to eat or how to buy tickets for the subway. These shards of knowledge are absorbed through osmosis, they are a factor of absorption through the simple act of living. When you manage to skip a class, when some piece of knowledge slips by you, it seems terrifying to admit your lack. To announce your foolishness, your inability to manage the simplest aspects of life, is to admit defeat.

When I stand behind the rural travellers from distant China entering Shanghai for the first time, I know their sweat. I know the shuffling of their feet. They glance around and mutter for their friends or family members to scoot closer, to help work this infernal machine. They don’t know how to operate it, but they also would prefer that no one else know they don’t know.

I remember this feeling from home, and I remember abandoning it the first time I was confronted with a screen full of aggressive Korean letters screaming at me to load up my transit card and be gone. Life seemed too hard, in that instant, not to ask for help. I was happy to look dumb, to smile the smile of the fool, if it meant I could get on the subway faster.

And maybe that is the true nature of the traveller, of the sojourner: an evolved comfort with discomfort (and in my case, an accompanying inflated sense of self-worth as a result). The growing knowledge that you don’t really know much of anything at all, and hey, what food is good here? The brown thing or the green stuff? I’ll take your recommendation.

9 thoughts on “Getting Good at Having No Clue: The Traveller’s Journey”