Overall, most of the people assembled for the Hindu self-mortification ceremony were very into Will’s dancing. 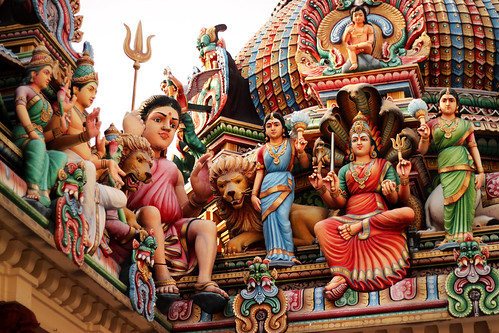 Sorry. Was this a private function?

We had stumbled, as we often did, into something rare and special and probably not meant for us. Boisterous and expanding across a rural roadway, we heard loudspeakers and shouting and joyousness, and we buzzed closer like moths driven to a technicolour flame. We had taken the ferry away from Yangon to Dalla for the day, and each rural roadway so far had proved fruitful and interesting and unexpected. We were drunk on sackjuice and adventure, and the sound of a party lulled us in.

I spied the goddesses long before we saw the hooks. I pointed out Lakshmi surrounded in parasols and bright orange petals, and then I pointed out the gentleman on the rickety wooden kitchen chair. Iron crescents slid in the skin of his broad, dark shoulders, and he grit his teeth and stared into the distance. Maybe he was on sackjuice as well. We realized instantaneously that this was probably a private religious ceremony, something sacred and honourable. Our baboon presence, with our flip-flops, DSLRs, and SPF-60, was at best ancillary to the nature of the celebration. We turned to go.

Hands grabbed at us, dabbing paint on our faces, smearing our palms with ruddy brown and red. Everywhere townsfolk reached out to shake hands, ask how exactly we managed to stumble into a Hindu religious festival in Myanmar. We shrugged, as while this situation was kind of becoming a custom for us, it was probably not for the residents of Dalla. We motioned towards the exit, which was the dusty road from whence we had first walked, and the people around us scoffed and waved. A pshaw, as though saying, “So soon? But you haven’t even seen the best parts!”

We were half-pushed, half wafted back into the crowd where children began to seek our hands, where people asked us more and new questions and practiced their English. Every other moment a new man, his mouth tight and red with betel-juice, would gesture to some other aspect of the festival. Get a load of that! they would nod. There was an invisible elbow-to-the-ribs with every gesture and wave and introduction. An invitation. Stay a while, see the rest, come tell us what you think.

As some of the main ceremonies started, the enormous lambskin drum erupted in silence. Tinny speakers protruded from a rusty wheelbarrow, and the sound equipment was somehow getting electricity even though we were far from outlets or houses. “Laaaaaaaaaadies and gentlemen!” the emcee cried in sudden, reverberant English. People everywhere tittered, glanced at us, ribbed their neighbours. We were part of the festivities, now. We were part of the show.

For the next hour or two we tried, semi-passionately, to leave. All around us there were interesting sights and smells and people to talk to, but we felt constantly out of place. Most of the jubilant crowd seemed joyed with our presence, encouraged us to get involved in whatever meek, dumb ways we could come up with, but here and there were the wincing eyebrows and squints of people who weren’t terribly happy that old honky was gumming up the works. With every attempt we made to escape, someone new would turn us around for another round of handshakes. Every time someone told Will to stop dancing, or Tony to not take pictures, or me to move away from the ceremony, others would suddenly appear and push us back into the fold. We wanted to err on the side of politeness, but it was becoming difficult to see where politeness lived.

I try, when I travel, not to be the Big Dumb Awful Whitey, the jagged, shiny remnant of imperialism and stealin’ things. Most of this involves being careful what I say, where I aim my camera, and paying attention to when I need to take off my shoes. Really, it is not terribly difficult to be a bland and inoffensive tourist, especially if you mostly enjoy eating local soups, taking pictures of pretty architecture, and hoping to stumble upon street parades and festivals.

But being as pasty and encumbered with expensive photography equipment as I am, I can sometimes attract attention. With attention sometimes curiosity, and with curiosity sometimes comes an offer to join in whatever festivities might be going on. 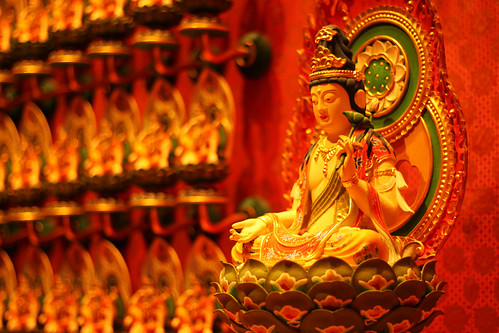 Just take a seat next to any of the thousands of praying monks. They won’t mind.

A massive Tibetan freedom protest in the streets of Dharamsala to honour self-immolating monks? We tried to politely watch from the ramparts, but after a while people tend to bring you into the flow. A parade honouring the dead king in a small town in Bali? If you stand around long enough gawking, people will eventually drag you closer for a better gawk. Another Hindu religious festival several hundred metres down the road from the first Hindu religious festival? Well, if the first one didn’t completely tucker us out, we weren’t going to say no to another.

Some of my greatest travel experiences have come at times when I have been deliriously uneasy, when I logically should have been making others feel uncomfortable. Even as I have felt certain that I was intruding, people have often invited me into their most cherished, sacred, and private moments. I am a constantly awkward dinner guest at the table of the world, with an inadequately priced bottle of wine, my clothes not formal enough for the occasion.

At times I feel like I am in a politeness competition, like I am at odds with my hosts in trying to out-genteel one another. Strangers and acquaintances and passersby bring me into their lives and their celebrations, and I glance, at every second, for a sign that my presence has turned, that the novelty of my inclusion has deteriorated. My eyes always on the exit, always searching for an unhappy scowl, I march semi-sure-footed into the strange unknown.