I felt vastly unprepared for Singapore. 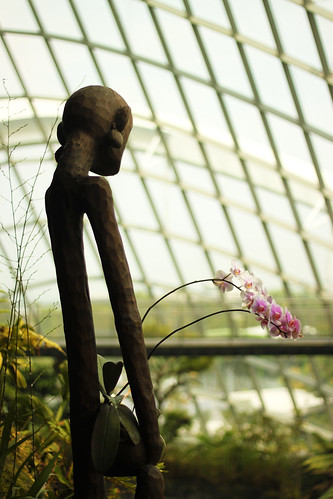 A lonely guy on a simulated mountain top.

In the Pudong airport waiting area, burrowed deep into a quiet wedge of carpeted flooring and poorly-attended restaurants, I surfed what internet remains available behind the Great Firewall. My gentle drift towards travel slackerdom has usually left me charmingly flighty. I’ve grown accustomed to doing things by the seat of my pants, planning excursions and travel just hours or moments before I disembark. It has become so second nature that I generally assume that the world will be unlocked by a glinting smile and a double-wide Canadian passport with several years before expiry.

But saddled with a heavy workload, Singapore had completely flitted from my grip. I had a ticket and a bed, and that was the extent of my forethought. The journey from one to the other, how I might fill the days, the kinds of foods I might try to eat, the dimension and value of the local currency: all of it was pure mystery. All of it was murky and vaguely Malaysian, at least according to the foggy ghost Singapore springing up in my cortex. What language(s) did they speak there, and how kindly were they to how little I probably spoke of them? How easy was it to get around, and where exactly did I want to get around to? Were the people more Malaysian or Chinese or Indonesian or foreigners, or were they green, acid-spitting space aliens from somewhere beyond the Andromeda galaxy? I wasn’t terribly certain, and hadn’t done any of my usual legwork before stepping aboard the plane.

It wasn’t until getting on the ground, the sunny sunny ground, that I knew quite how okay I would be.

Changi Airport, for one, is a marvel of efficiency and pleasantness. Arriving absurdly early in the morning, I breezed through immigration and retreated to the familiar comfort of a Coffee Bean and Tea Leaf (a chain with which I only grew familiar in Korea and have missed dearly since). Free, strong wifi assaulted me from all sides in an invisible swarm of fruit bats, and I was able to understand my path into the city and beyond. I descended into the depths of the subway, easily purchased a subway card, and was on my way.

The subway map, entirely in English, told of the path to my hostel and beyond. The people politely stood and waited in orderly bundles, allowing other passengers to disembark before filing on gently and quietly. The air conditioning blissfully flowed across my sweat-slick back, and I noted how everyone around me was not staring directly into my eyeballs, but rather going about their own quiet, genteel business. I was in Tokyo, circa Western Europe, lodged somewhere on a garden planet millions of miles away.

For all its ease, Singapore was lacked the kind of visceral grunge I dopily expected whenever I was in southeast Asia. Certainly Bangkok and HCMC and Yangon have their own bastions of hoity-toitiness, of malls and Starbuckses and rocket-fuel air conditioners, but they are fewer and far between. My thirst for dirt-cheap accommodation and street fare that I pretend won’t ruin my insides like a rusted iron brick was not to be slaked in the pristine, glinting edges of Singapore. Though I rarely partake in sleaze, I benefit from knowing it is available to me nearby. With danger and unsafe road conditions and terrifying food preparation techniques comes ludicrously cheap transport and all the chintzy crap I can stuff into my backpack.

But bereft of my usual gritmongering, lacking in ways to shellack myself in dirt and trudge up an old dusty mountain top to a forgotten temple attended only by the ancient (and terrifyingly fit) elderly, I had to fill the void. And Singapore, glorious, modern Singapore, provided in kind.

Movie theaters abounded everywhere, with pre-booked seats and a movie-going populace that did not loudly speak into their phones in Mandarin through the duration. As it turns out, a Wes Anderson film in Singapore on a Tuesday at noon does not draw the largest of crowds and so I luxuriated in my nearly-empty theater, my wide, frigid seat buffeted by entire rows and columns of adjacent emptiness in which to lounge.

When I was not luxuriating in cushiony, frigid splendour, I was taking in the ultra-modern sights that Singapore had to offer. I would trudge through a half-dozen malls and emerge, suddenly, at the zoos and the bird parks. I spent the better part of a day walking around the innards of two massive futuristic green houses, domed enclosures of botanical exceptionalism. The Cloud Forest, a simulated mountain top enshrouded in mist and cold and lichen and orchid, shivered in an enormous convex glass case. Its nearby sister, the Flower Dome, offered plants from every continent as well as a punnily-titled rose competition. Both behemoths were surrounded by the Supertree Grove, a series of light-up structures the size of apartment buildings, covered in purple plate metal and vertical hanging gardens.

I tried to remember the other kinds of things I did in southeast Asia. I tried to remember the steadfast, callused roughing it I generally thought to be necessary parts of my travel life. I carried bandages and diarrhoea pills around with me as a habit, I stuffed Tiger Balm into my pockets for what I was sure would be the thousand, thousand malarial mosquito bites I would endure. Cityslicking was for another kind of life—the young urbanite, the bohemian, the high-powered business people.

Did I even know what I was doing? Did I even like this change of pace? After a particularly long busride I disembarked into a grassy, enclosed lot filled with expensive restaurants. Nestled between was a private gallery holding a Dali exhibition, where I filled my heart and my eyeballs with all the art gallerying I could hope for. Hunger slaked, I walked nearby to a brewpub and drank expensive, fine beer and surfed the abundant wifi. I could, in fact, get used to this.

7 thoughts on “The Malltown and the Cloud Forest”