After the glorious weirdness of Dalla and the delights of Yangon, we took, as all traveller in Burma must, the long road up to Bagan. Being the sometimes ignorant turd that I am, I knew little of the area except that it was full of temples, and possibly a lot of them. In Southeast Asia or India I had some inkling of history, connections to local religious beliefs and a sense of cultures, while Burma existed outside of my cultural awareness bubble. We slid off of the long overnight bus into the wilds of the archaeological zone and were left to fend for ourselves amid the prickly brick pagodas piercing the endless, scalding sky.

In the next few photos, the astute amongst you might detect a theme. Hold the answers in your hearts and scribble it on the palms of your hands in purple Crayola markers, hoping that your deductive reasoning has served you well.

Did you get it? The secret theme was: pagodas! If you got it correct, you should caress yourself across the back. Not quite a pat. A pat is for the stupid failures who couldn’t decipher this puzzle. Not like you. You brilliant diamond.

Below is a photo of a skull. Tony, in the throes of a particularly nasty strain of stomach rust, began to sit out of a number of the temples and pagodas we stumbled across, when the prospect of cramping up some stone steps in the dark seemed unpleasant. Instead he began rummaging through the bushes, and asked if I could take a picture.

Where Bagan wasn’t knee-deep in temples, it was swimming in Buddhas. Gold and silver, stone and clay, red and magenta and pale white: Buddhas and boddhisattvas were all over the place, appearing in all sorts of crevices and around corners. Have you played hide-and-go-seek with Buddha before? He’s not so good. He’s kind of everywhere. 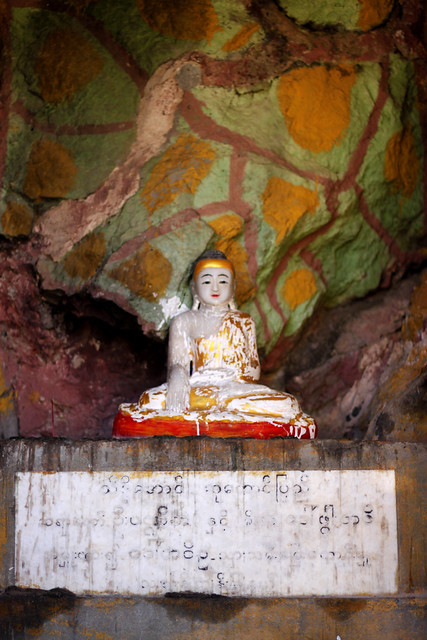 Just hours outside of Bagan was Mt. Popa, a monastery at the top of a strange, spindly peak. Tony and I both observed that, from the peak itself, the view was actually kind of boring. You needed to scamper up a nearby hill to actually get this view, which is appropriately slack-jawing:

After Bagan, we decided to set out to Mandalay, which had its own particular splendours. A betel-nut stained elderly gent named Mr. Toe offered his taxiing services to us, and away we went to discover the local gems. Behold: 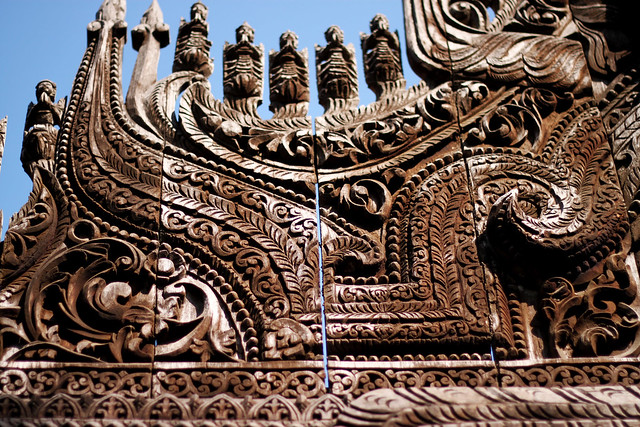 Also, dig this bridge, star of stage and screen, and also every piece of roadside art aimed at tourists anywhere within 200 kilometres of Mandalay. It is very beautiful, and also a little bit rickety when you are actually walking its kilometre of length.

Burma. If two photogluts-worth (more on Flickr!) of photos haven’t convinced you, you should probably be going there right now.